SwiftLee > Swift > Swift 5.0: How to migrate your project and frameworks

Swift 5.0 has been released in March 2019 and is the first ABI stable Swift release. Although a lot of resources cover the new things in Swift 5.0, they do not often offer you information on what you need to do to update your project to Swift 5.0.

I wouldn’t be surprised if this could be helping to convince your product manager to plan time for the migration.

Xcode offers a migration assistant to automatically upgrade your code to the current Swift syntax. This conversion will use the latest Swift version available with the Xcode version you have installed. Xcode 10.2 is the first version to include the Swift 5.0 binary and is therefore needed to do the migration.

Often times, this automated migration will do the heavy lifting for you. Therefore, I recommend starting your migration by going into Edit -> Convert -> To Current Swift Syntax.... Make sure to execute this only for your project and framework. You can skip this for any external dependencies. 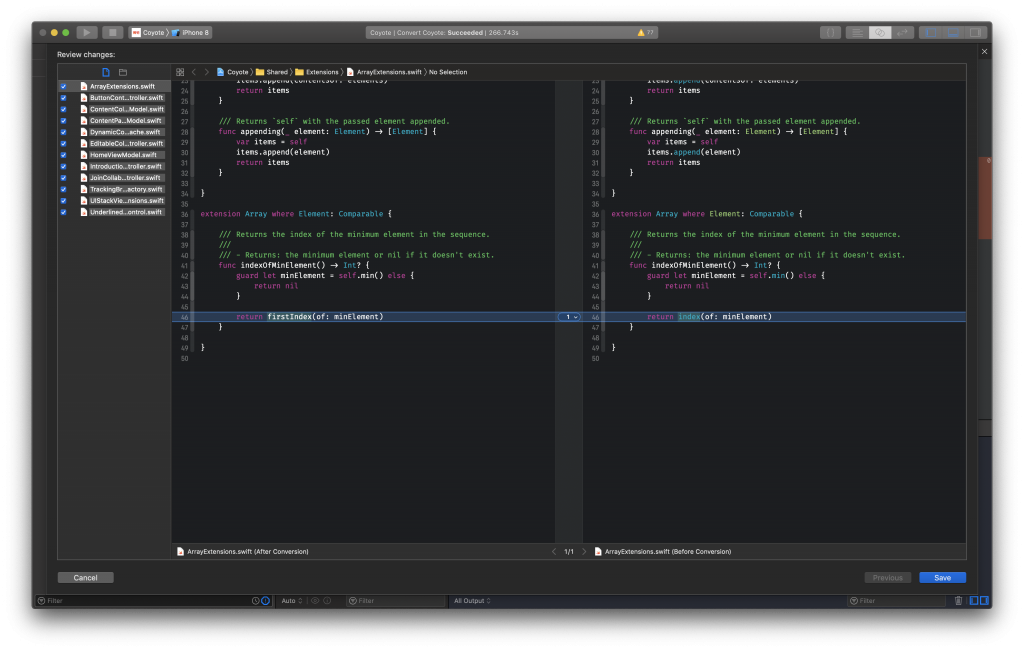 Most likely, you’ve got some Swift dependencies you need to update. A lot of the bigger open source projects like Alamofire and Moya started working on a Swift 5.0 version already. However, it’s likely that not all your dependencies are up to date already. Although I would like to encourage you to do the migration and submit a pull request yourself, you probably have to wait a bit till the project owners did it themselves. At WeTransfer we’re often checking in with our dependencies to see whether an update is available already.

If you’re planning to do a full intensive test of your app after this migration, it might be worth to directly update your dependencies as well. Your test will cover these updates directly as well, which can be a win-win.

If you’re using Travis, Jenkins or any other CI platform you need to upgrade Xcode there as well.

The Xcode converter only executes basic code changes. It does not take into account the new Result type which is now included in the Swift standard library. A lot of frameworks have included a Result type in their code. This could mean that you’ve got quite a view enums which are not needed anymore. However, to replace these from your dependencies, you’re dependent on code changes in the external framework.

It’s likely that your current Result enum only defined a type for the success case. The Swift 5.0 Result variant also requires you to define an expected error type. Being a good citizen you should try to make this error type specific to what you expect. However, if you want to speed up your migration, you can also just set the type to Swift.Error.

If you would like to read more about the new Result type in Swift 5.0, I would recommend you to read this article by Paul Hudson or go through the slides from Tjeerd in ‘t Veen who did a talk at Appdevcon 2019.

ABI stability is a topic on its own. You can read more about it in this blog post on the official Swift blog. It’s good to take into account that the download size of your app will shrink as apps don’t have to embed the Swift standard library anymore. I wouldn’t be surprised if this could be helping to convince your product manager to plan time for the migration.

If you would like to dive into Swift 5.0 a bit more, you can go to the Migrating to Swift 5.0 blog post.

Try catch in Swift combined with throwing errors make it possible to nicely handle any failures in your code. A ...
Read More
28 May 2019 Swift

Advanced asynchronous operations by making use of generics

Asynchronous operations allow you to write long-running tasks in a distinct matter while being able to add dependencies between several ...
Read More
10 December 2019 Swift